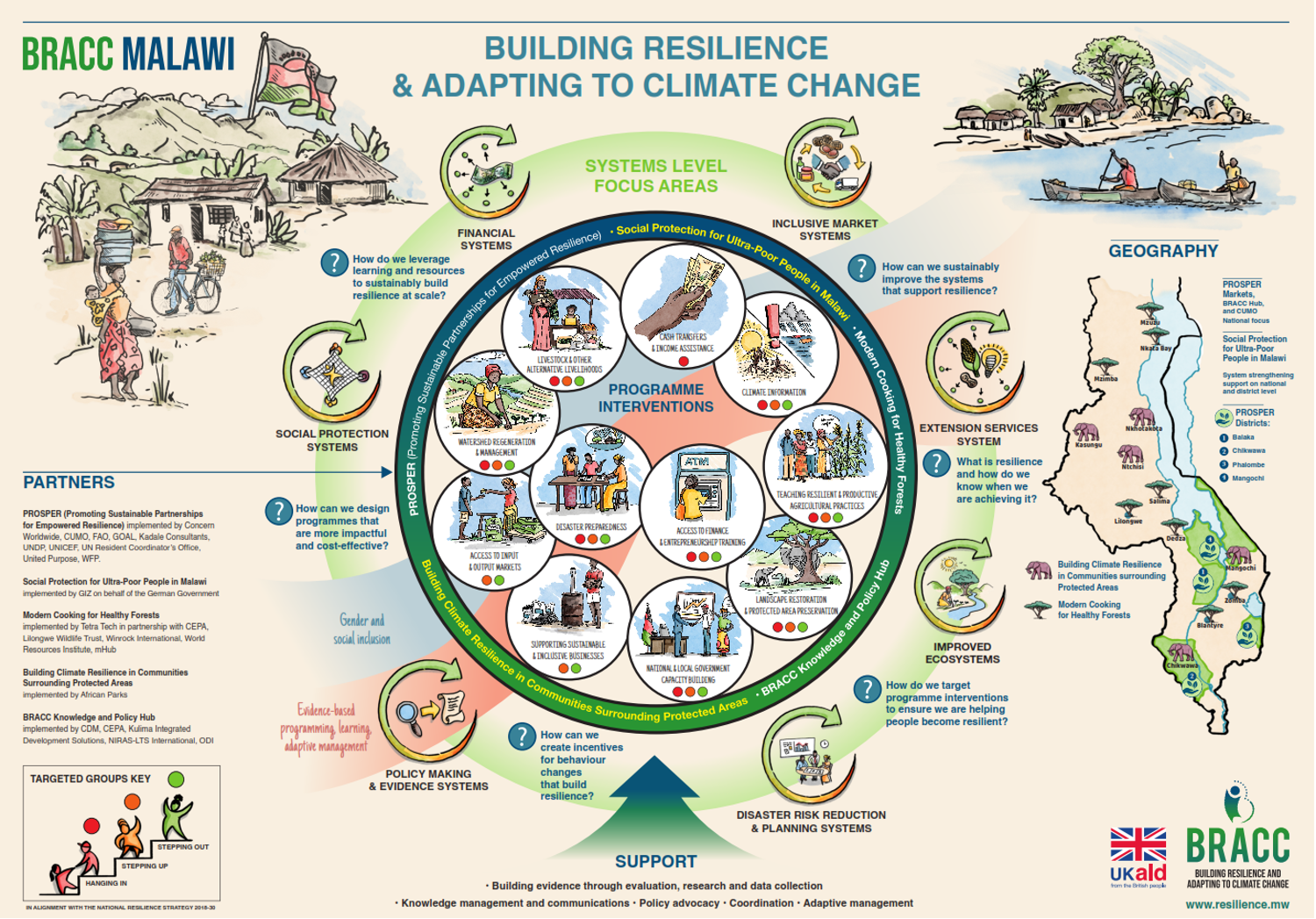 What was Katharine´s motivation to give a Seminar with C-hub?

Katharine firmly believes that greater dialogue is needed between different actors in order to ensure active learning from past adaptation efforts to inform effective and equitable future adaptation. Given she already works across several of these spaces (applied research, policy advice, programme design and implementation) and tries to stimulate these dialogues, she was excited to hear about the existence of C-hub and its aims to do the same.

The BRACC programme in Malawi

Building Resilience and Adapting to Climate Change in Malawi (BRACC) is a programme funded by the Government of the United Kingdom. The programme was launched in 2018 with the long-term objective being to contribute to a reduction in extreme poverty and end the recurrent cycle of hunger and humanitarian assistance in Malawi. BRACC focuses on the areas of southern Malawi most vulnerable to extreme weather, poverty and food insecurity. The programme aims to reach around 300 000 households (approximately 1,7 million people) in Malawi with interventions which will increase the resilience to weather and climate risk, not only for individual households, but for whole communities.

Katharine Vincent, an adaptation practitioner and scholar, is director of Kulima Integrated Development Solutions (South Africa). She holds her PhD (looking at gendered vulnerability to climate change in South Africa) from the Tyndall Centre for Climate Change Research in 2007. She is currently a visiting Associate Professor at the University of the Witwatersrand, Johannesburg (School of Architecture and Planning), a Visiting Researcher at the University of Leeds (School of Earth and Environment), and an Associate of the Centre for Climate Change Economics and Policy. Katharine’s general interest is in the human dimensions of global environmental change and social development. She has worked and consulted for a variety of organisations, including NGOs, government, inter-governmental organisations and the private sector. 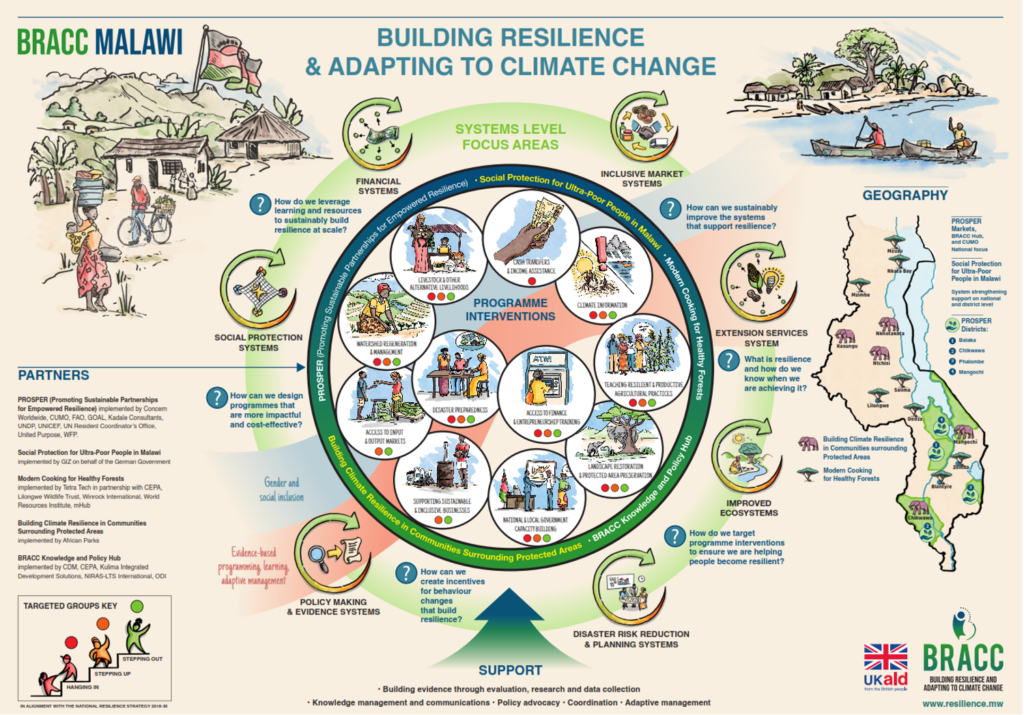 Reading between the lines

The programme created space for learning within climate change adaptation and is categorized as a success due to cooperation and positive impact evaluation. Nonetheless, reading between the lines of the programme reveals some dilemmas.

The BRACC programme has been brought to an end two years early as a result of reductions in UK funding to overseas development assistance – which will inevitably lessen the potential impact in resilience building and adaptation. The team is trying to glean the major lessons that have been learned from two years of programming to inform future resilience and adaptation progammes in Malawi.

Though discussion amongst adaptation practitioners supported this holistic approach, the programme´s innovative approach was hindered by previous development conceptualizations and coordination friction between various development actors. The programme was built on previous projects with their own methods, interfering with the more transformative approach of BRACC. In addition, BRACC´s ambitions to work with diverse development actors and policy layers were particularly challenging. Even development partners with a common goal operate differently, restraining efficient collaboration. Moreover, policy integration, though deemed especially important, added even more friction to the holistic approach. Policy makers were included in the programme due to the lack of governmental funding and the risk of a parallel development structure. However, there was an incoherence between the policy makers´ and the programme´s motivations and willingness to learn or transform. Policy makers within Malawi tend to be preoccupied with reelection. In addition, the policies of Malawi interfere with the programme´s effort to build resilience, demanding some structures to bypass governmental structures and institutional blockages.

The programme was implicitly built on the notion that poverty reduction would generate resilience. But does it always? Poverty is a considerable determinant of vulnerability in the Malawi context. Malawi is an agricultural country, making development in the past decennia typically focused on poverty reduction through the efficiency of agriculture. Efficiency has often been pushed by subsidized use of fertilizers and irrigation without thinking of water resources, neither in the present nor in the future.

These measures often do not consider sustainability, highlighting that current attempts to address poverty will only build resilience if they consider the current and future risk context.

The contradiction between poverty and resilience became very apparent when resilience-building measures negated a prominent source of wealth in Malawi, namely burning of charcoal. Resilience interventions try to address deforestation to reduce flood risk, by promoting landscape rehabilitation. However, deforestation is driven by the demand for fuelwood and charcoal for energy, and government attempts to enforce the forestry strategy have been met with resistance by some local populations due to the lack of income sources. This demonstrates that poverty reduction and resilience are not necessarily parallel lines, as first assumed in the BRACC programme.

What can we learn from this?